Last year, Dexter students in grades K-6 were able to try roasted potatoes from two farms within 15 miles of their schools. The potatoes were featured in cafeteria taste tests, not on the lunch line, and in only the elementary schools. But they were a hit!

This year, students in grades K-12 were able to try local potatoes both in the taste tests and on the lunch line! This represents a step forward for our efforts. The successes this month, include:

With those successes, we still had some challenges. This month, the potatoes came from 4 different farms that are within 200 miles of the schools, which is further away than we’d like. However, we are still working on ways to get local supply chains to meet Dexter Food and Nutrition’s needs while still getting in food grown on farms within our immediate vicinity. Check out this map of our local producers to see the trends in our local purchasing so far.

But now for the fun stuff. . . student feedback! Here’s some audio from the sampling event at Wylie:

Here’s a breakdown of what Dexter students thought of the locally grown roasted potatoes they tried:

Students in Dexter have had exposure to these local food taste tests almost once per month for more than a year now. From students’ excitement when they see us and their willingness to share stories from last year’s tastings, it is clear that these experiences with local food are memorable for many students. One student at Wylie said to our Farm to School Coordinator:

“I remember you from Cornerstone! Remember when I tried that red thing with the green sprout?” [not remembering what she’s describing, FtS Coordinator responds: Did you like it?] “Yeah, I liked it a lot with ranch!” [FtS Coordinator: Oh the radish! I’m glad you liked it and remembered!]

Some other notable quotes from Wylie Elementary include:

“I tried roasted potatoes last year at Cornerstone. So I knew I would like these.”

Students at Creekside Intermediate school were going to great lengths to try to get “seconds” on samples. Parent volunteers reported a group of boys switching sweatshirts to try to get extra freebies. Food and Nutrition staff were able to tell the students this month, though, that if they wanted to eat more local potatoes, they could get them the next day in school lunch line! Even students who normally bring lunch from home were excited to learn that they could bring $0.50 and get just a side of the local potatoes.

And a quote from Creekside:

“Can we put in a handful of votes?!” [no, what kind of a democracy would that be?!] “But I reeeally liked them!”

Also, the potatoes were quite pretty and so were our volunteers! . . .

All Red Potatoes and Tri-Colored Fingerlings being cut up at Cornerstone Elementary.

University of Michigan School of Public Health interns helped us out this month!

University of Michigan School of Public Health interns helped us out this month! 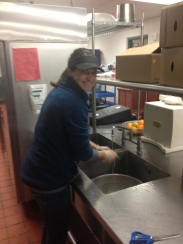 Elizabeth was a rock-star volunteer this month!